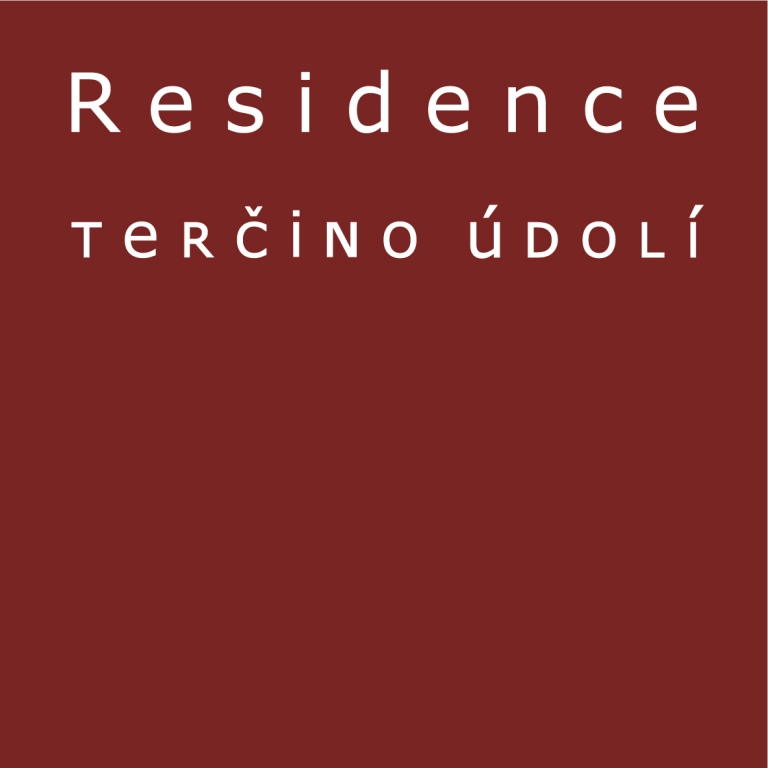 A total area of 162 square kilometres in the Bohemian Novohradské hory spreads around Nové Hrady, Benešov nad Černou, Dolní Dvořiště and Malont to the state border with Austria, and extend almost to the Danube Valley.

Of the total of about eighteen Novohradské mountain peaks that are above a thousand metres, three are in our territory. The highest of them is  Kamenec (1,072 m), followed by Myslivna (1,040 m) and Vysoká (1,034 m).

The uniqueness of the Novohradské hory consists mainly in the rarely preserved nature spared from human intervention thanks to their location in the former border area. In year 2000, the Novohradské Hory Nature Park was declared here.

Discover a piece of their charm, diversity and purity of nature and the attractiveness of history. Almost at every step, you encounter some point of interest. It is naturally not possible to describe all the natural wonders or historical monuments blown away by time, for that not even the significant personalities who lived here. We bring you only a fraction of the most significant. Visit the Novohradské hory and discover this for yourself.

The Novohradské Hory Nature Park is an extensive area with significant nature and aesthetic value, with a harmonious mountain and foothill landscape. The area is a significant high level nature preserve environment whose formation comprises nature close to the forest and meadow ecosystems, peat bogs, lakes and springs, and also the preserved historical value of the area. The uniqueness of the Novohradské hory consists mainly in the rare nature preserve spared from human interventionthanks to their location in the former border area.

In the Novohradské Mountains, we find many peat bogs of upland and intermediate type, of average thickness 0.5 - 2.5 m, mostly on small areas and at heights of 600 - 1,100 m above sea level. Small peat bogs are dominant in the valleys of the lower river flows. The biggest is the Stodůlka peat bog with an area of 30 ha (nature monument, indigenous dwarf pines and pine wood peat bog). The peat bog at Černé Údolí had an area of 20 ha that was drained and forested.  The rest are substantially smaller and their total area is about 170 ha.

Terčino údolí - romantic landscape park and natural monument with an area of 138 ha in the Stropnice River Valley, which is located about 1 km from Nové Hrady.  The Terčino údolí and Lesnická educational trails pass through it. Here, you can admire beautiful nature, foreign woody plants and an artificial waterfall.

Stories of the Nové Hrady Houses/Příběhy Novohradských domů - the guide is a book of the same name that carries the stories of the individual houses and streets.

Nové Hrady memories/Pamětí Novohradska - historical-educational trail, physically more demanding, but you will discover the exquisite corners of the Novohradské Mountains

Vitorazska memories/Pamětí Vitorazska - Nové Hrady region, Třeboň region, Waldviertel - the historical-educational trail comprises the Czech and Austrian variant; you can branch off it several times and return to Nové Hrady; it is suitable for families with children

Via Verde - the region around the Municipality of Horní Stropnice and the Harbach - experience trail, which invites people to engage in sports activities and reminiscence 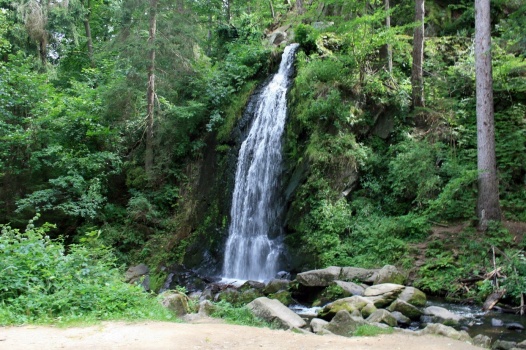 The natural nature monument Terčino or also Tereziino údolí lies southwest of the town of Nové Hrady, in the valley of the Stropnice Stream. This territory was declared as a protected landscape area already in 1949; its area is 138.29 ha and lies at an elevation of 500 - 540 m.

The Terčino Valley is mostly a landscape part. This park was founded in the 2nd half of the 18th century on the initiative of Count Jan Buquoy upon request from Countess Terezie Buquoyová after whom the park is named. At the turn of the 18th and 19th century, the park was repaired, and apart from the domestic trees, exotic trees were also planted here and many Romantic buildings were built that served Spa purposes (Hamr, Lázničky, Modrý dům, Švýcarský dům). The picturesque scenery of the valley is completed by an artificial waterfall in the western part of the park on the mill race from the Stropnice River. The ruins of the Gothic Cuknštejn Fort lie on the eastern edge of the park on higher ground in almost initial condition. An educational trail and a walking circuit run through the park. They acquaint the visitors with the history of the park and with all its points of interest. 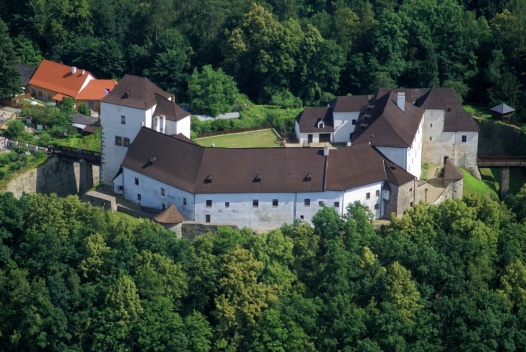 First mention of the Novohradský Castle/Novohradský hrad appeared already in the year 1279. It was established by the Vítek dynasty to protect the Vitoraz trail. It was conquered many times, burnt and it was also afflicted by earthquakes. After all these events, the castle was renewed at the beginning of the 17th century and served as a military fortress. Witness of the fact that it was a very food fortress is indicated the by surviving deep bricked ditch, which is unmatched among the Czech castles in terms of bulk. In spite of this, it was conquered again and was owned by the Buquoy dynasty up to 1945. An extensive exposition is now open to the public. The family portraits, weapons, armour and many other items are on display in the castle interior. 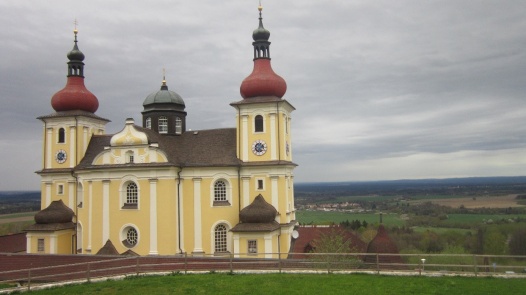 The Dobrá Voda resort and pilgrimage site lies on the northern shoulder of the Novohradské hory at an elevation of 695 m above sea level. The village that is located 7 km southwest of Nové Hrady lies in the District of České Budějovice. The village’s dominant feature is the pilgrimage Church of the Assumption of Mary, a valuable High Baroque building built on a terrace above the mildly radioactive spring. The Church, which is harmoniously integrated into the landscape, was built in the period from 1708 to 1715.  The church has rare ceiling paintings from the year 1729, partially repainted during the repair of 1888. The equipment is original and come from the 18th century. The medicinal effects of the water from the radioactive spring were discovered in already in the 16th century and the village was a sought-after Spa resort. 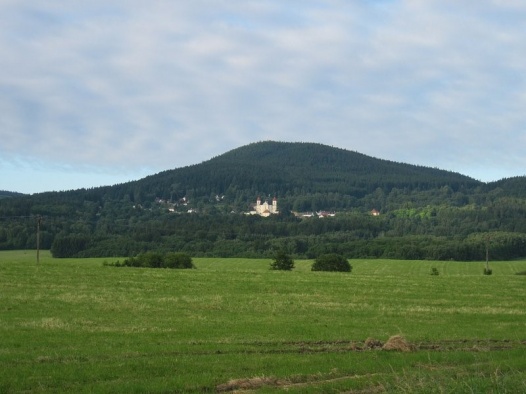 The peak (Vrch) (953 m) in the Nové Hrady is about 1 km westerly of Hojná Voda and 10 km south-west of Nové Hrady. The peak has a lookout from which the whole Nové Hrady area is visible. An extensive granite scree field that is partly infested by wild vegetation spreads on the shoulder. Bizarre rock formations are in the forest sections. The most popular of them is the Napoleon Rock. Kraví hora is accessible via the red trail from Hojná Voda (about 1.5 km) or via the green trail from Dobrá Voda. Access is possible also via the blue trail from Trhové Sviny (about 20 km). 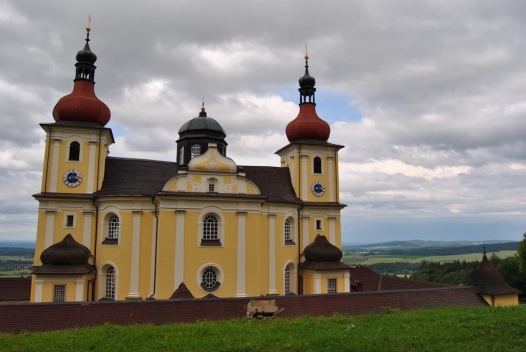 In 1698, the fame of Hojná Voda was quenched as a new spring was discovered a short distance below Kraví hora. The place and the settlement established around it were named Dobrá Voda (in German Brünnl). The wayside chapel above the miracle spring was soon overwhelmed by multitudes of pilgrims, so Count Albert Karel Buquoy in 1706 initiated the construction of the parish and pilgrimage Church of the Assumption of Mary. The contractor is unknown. The ceremonial consecration was done in 1715. The priests working here were chosen by the Count of the Vyšebrody Monastery. The expanding was granted market freedom and a coat-of arms - an overgrown hill on a blue shield with a flowing spring. During the fire of 1949, the church suffered but unlike the surrounding houses, it miraculously survived. The Baroque sanctuary has an elliptical ground plan permeated by a short transept at the middle, to which two towers were added, the sacristy is on the eastern side. The church is surrounded by a cloister with two chapels. The front has a double-flight staircase with a tripartite open chapel below it at the centre of which is the reservoir with the medicinal spring. The main gold-plated altar in the church interior (completed in 1718) bears the painting of the Lady Comforter (a copy of the painting from Graz).

A lookout tower that is worth visiting is located only a short distance across the border, and you can choose one of two trails, the shorter of which can be handled with ease even by small children.

The village is one of the oldest in the Nové Hrady area and was mentioned already in the 13th century. It is one of three surviving villages in Europe. The fortification probably from the period 1612 - 18, with six cylindrical bastions protected the entire village and farmyard. The Parish Church of John the Baptist in Stětí that was mentioned already in the year 1332. It is built on the village green and it has a very interesting exterior; it is actually designed according to the Bethlehem Chapel in Prague. In the period 1370 - 1412, the presbytery was vaulted; however the church was completely destroyed by the Hussites in the year 1423. It was reconstructed in 1455 as a four-nave chamber on a square ground plan. The Gothic Stronghold from the 15th century was reconstructed in the 17th century in a manner close to Italian rural castle architecture. It was gradually owned by various owners and became the property of the Nové Hrady Manor in 1618. It was further modified in the 19th century and the 70s of the 20th century. The pond below it was also re-discovered and filled with water. The stronghold is currently in very good condition and offers a museum exposition of painted folk furniture. 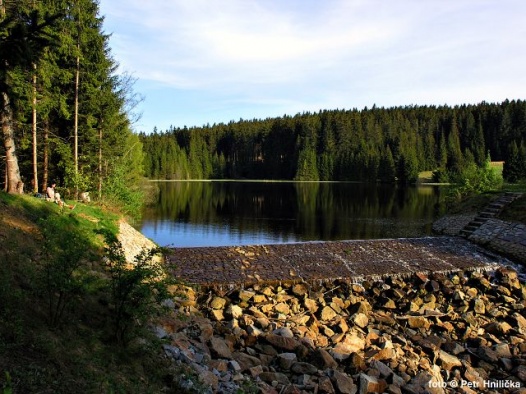 In summer, the visitors can cool themselves off in the water of the Nové Hrady fish ponds, reservoirs and swimming pools. Everyone values a few swimming hints during your trips in the Nové Hrady Mountains.

One of the water reservoirs, the so-called splash dams built to ease the transport of timber on the Černá and Malše Rivers and the Pohořský Stream. These allegedly ranked among the smallest watercourses in Europe that were modified and used to float timber. The Pohořský Fish Pond (also the Jiřice Reservoir) was built in mid-18th century on a stream of the same name. The first surviving records of timber rafting from the area of the Nové Hrady forests was not made earlier than in 1783. The Municipality of Pohoří itself was built around the road to Freistadt in Austria and exists since 1758 and continues to grow rapidly. In 1890, it has a total of 186 houses. But in 1946, it was afflicted by the expulsion of the German-speaking population and demolition of the houses. After 1955, the exodus of the population continued until its complete demise. It is currently being resurrected mainly for recreation purposes. The fish pond was popularly used by passing cyclists and tourists for refreshing swimming in the peat-coloured water.

It is located on the edge of the municipality, on the Stropnice River, in the direction of Dlouhá Stropnice. Refreshments, motor camp. It was completely renovated in 2006.

It is located between the municipalities of Horní Stropnice and Terčino údolí.

It is located near the Municipality of Veveří southerly of Nové Hrady.

The biggest of the eight splash dams in the area of the Novohradské Mountains. It was established by the Buquoy family at the end of the 18th century on the Švarcava River (currently the Černá River) at an elevation of 766 metres. For the purpose of rafting timber, it could hold up to 100,000 cubic metres of water on an area of 5.24 ha. The construction of the pool was done in the period 1789 - 1796. In about the same period, a settlement named Goldentisch was established at this site in 1791. It had 11 houses in which up to 130 German lumbers and rafters lived. During the floods of 1794, the dam broke and was replaced by a new even more monumental dam one year later. It survived until the one thousand year floods in August 2002 when it was broken for the second time. Fortunately, even this time it was rebuilt in 2005 and perfected by inclusion of a new, safer spillway. However, the settlement was re-occupied after the expulsion of the German population after 1945 and demised. To date only the cast-iron cross survives and it lies between two chestnut trees on the dam, a few fruit trees and clusters of golden-yellow daffodils, which blossom every spring at the same places as they did earlier.