Český Krumlov is a district town in the South Bohemian Region, the town was included in 1992 onto UNESCO\’s List of World Cultural and Natural Heritage.It belongs between one of the most visited towns in Czech Republic, not only because of beautifully maintained historical atmosphere but also thanks to best-preserved historical buildings, primarily from Gothic and Renaissance, which are above the meanders of the Vltava river. The inner city is a system of streets with regular square which has not been changed since its establishment. You can find here a large number of well-preserved town houses – Gothic, Renaissance, baroque from which everyone of theme has a its story.

1. The castle of Český Krumlov

There is no need to long-windedly introduce the Český Krumlov castle, which is has the most extensive  castle grounds in ČR right after the Pražský hrad. It also includes a baroque castle garden, which was founded in 17th century and is an important part of Summer-residence Bellaria, In front of itt is situated the revolving auditorium (music pavilion).

Apart from the permanent exhibition of drawings, watercolors and documenting of the life and work of the artist there is exposed Schiele-designed furniture, death mask and the only Schiele´s sculpture. Egon Schiele Art Centrum is in the street Široká č.p.71.

There is currently on display more than 20 motorcycles of various Czech and foreign brands at this museum. This museum is in the street Široká nr. 80.

4. Museum of Architecture and Craft

The visitor has a unique insight into the construction history of the medieval city. Museum is in the street Dlouhá nr. 92.

The puppets have been borrowed from the Theatre Department of the National Museum and from the Náprstek Museum of Asian, African and American Cultures in Prague. The expositions counts more than 200 historical puppets and it also includes a mechanical model of funfair and the original of mechanical theater from 1815. Museum is in the street Dlouhá nr. 29.

The church was established before 1334 by Peter I. von Rosenberg, and was a part of the Rosenbergs´ hospital (Latrán No. 13). The building remains with the preserved Gothic constructions and details. In this church is located the exposition of puppet theatres and old czech marionettes. Church is in the street Latrán nr. 27.

The tradition of brewing beer in Český Krumlov goes back to the very beginnings of the town. In this brewery, cou can take various tours and reveal some of its secrets. This brewery is in the street Latrán nr. 27.

The unique preservation of the historic center of Český Krumlov is well displayed by the ceramic model in this museum. This Museum is in the street Horní nr. 152.

Roman-catholic  church of St. Vitus with its neo-gothic octagonal tower became the second dominant of Český Krumlov. The church occasionally becomes a venue for concerts of classical music. Church of St. Vitus is located in street Horní nr. 156.

The gallery here presents annual expositions which mostly focus on Czech authors. The house of photography is in the street Šatlavská nr. 141.

A unique exposition of criminal punishment and instruments of torture, spread throughout the newly-reconstructed 15th cellars below the Český Krumlov town Hall on the town square. Museum of torture is located in Náměstí Svornosti 1.

The visitors in this museum will learn the story about the beginings of photography along with the story about its main innovators. Museum is in the street Linecká nr. 272.

Below the town square, at Kájovská ulice no.68 in a newly reconstructed Renaissance house, a new wax museum was opened in May of 2001. A visitor can see czech kings as well as the czech and foreign public figures. The Wax museum is in the street Kájovská nr. 68.

Come visit a mirror labyrinth which belongs between the biggest in Europe. This unique mirror hall counts 90 mirrors! It is followed by smaller unusual crystal maze composed of clear glass. The Mirror labyrinth is in the street Široká nr. 52.

Do you want to know more about mining? If you visit Český Krumlov, you can go to the Graphite mine and see the attractive underground of the graphite mine. During the tour, which is guided, you will enjoy a ride in mine train. Clothing, shoes and protective equipment will be borrowed. The Graphite mine is in the street Chvalšinská.

Only 1,5 km from th city center you can find the riding club Slupenec. Take a romantic ride on a horseback through the nature and enjoy a  striking bird´s eye view of Český Krumlov town from a horseback, no matter if you are a beginner or an experienced rider. The Horseback riding club is in Slupenec nr. 1. 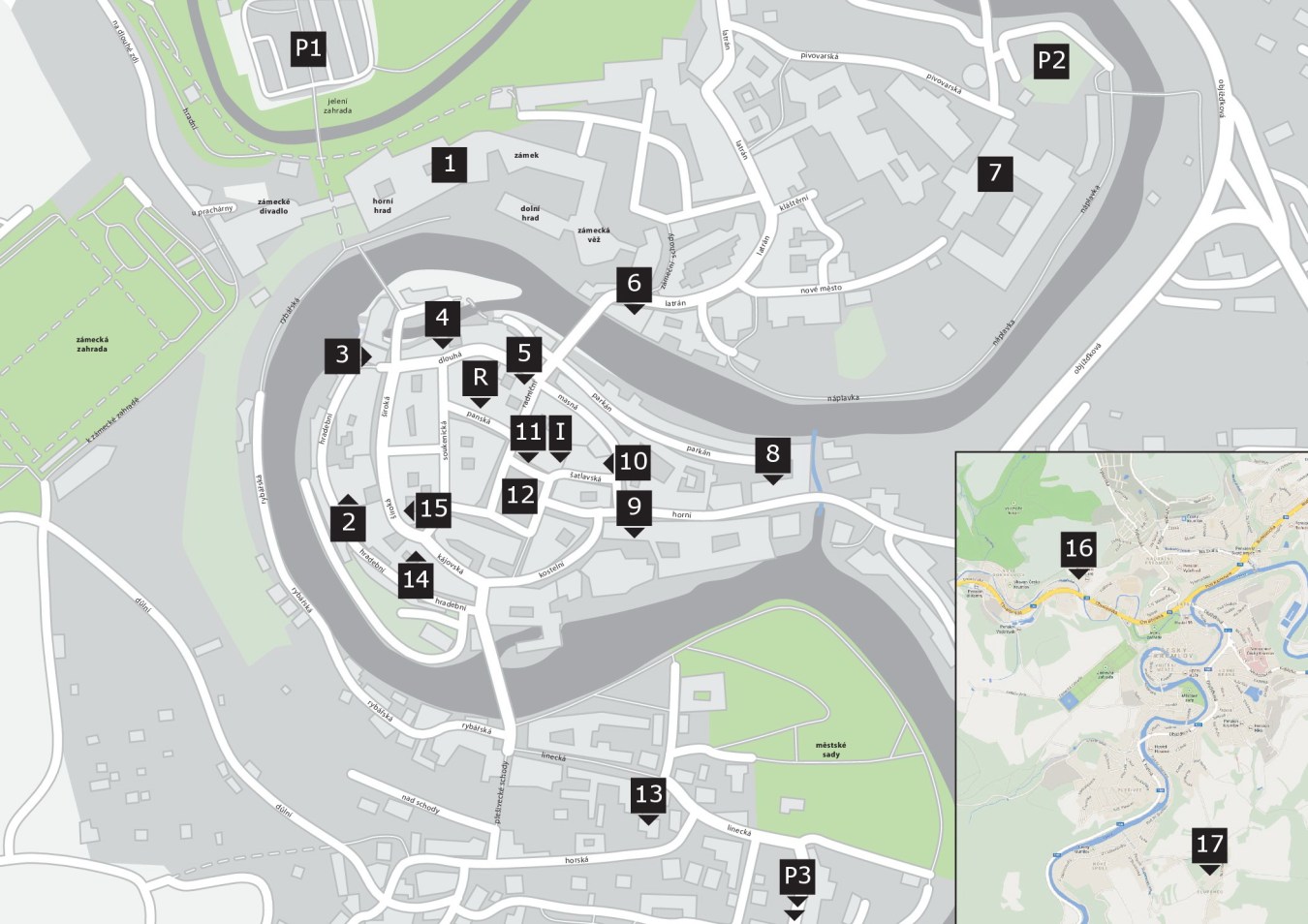