Activities in the vicinity 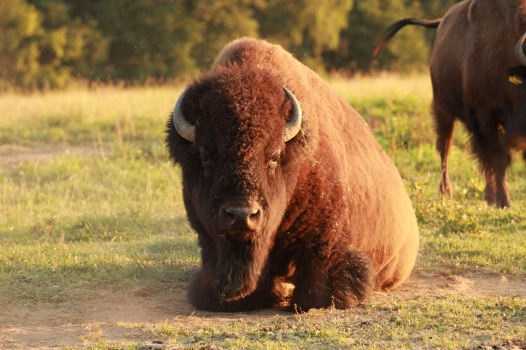 Our additional offer of activities in the vicinity of the farm

If you want to spend an active holiday, you can choose from our rich offer of activities:

The concrete swimming pool with grass beach is located between the municipalities of Smrhov and Malče about 1.5 km from our bison farm. You get there via a marked green tourist trail or comfortably by car.

The ruins of the castle from the beginning of the 14th century, which stood on the rocky headland above the Malše River is certainly one of the most beautiful excursions in the near surroundings. The castle is an interesting rarity in South Bohemian architecture. Unlike other castles, a key point of the defensive elements of Pořešín is the outer castle wall, which is typical in particular for the Moravian castles. The castle also the venue of cultural events and is also the site of a castle museum.

You get from Smrhov to the castle on foot along the green and subsequently blue tourist trail of approximate length 3.5 km. Or on a bicycle via secondary road no157. 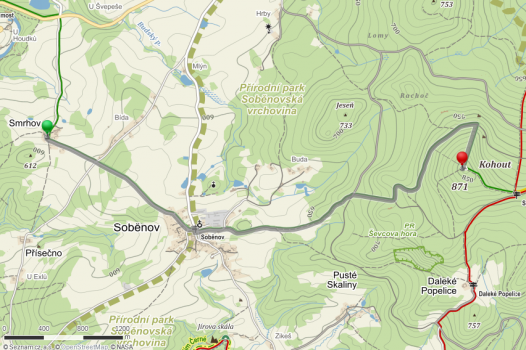 Kohout (871 m above sea level) is the highest mountain of the Slepičí Mountains and the entire foothills of the Novohrady Mountains. The mountain has a conical shape and its peak comprises a picturesque system of weathered granodiorite rocks. Kohout, respectively the vertical stone column on the peak was erroneously considered as the centre of Europe due to its stone column with the Latin inscription, which was used to create the German military maps in 1867. There are many marked trails and further trip options in the neighbourhood.

From Smrhov, you get to Kohout along the marked green trail that is about 6 km long. 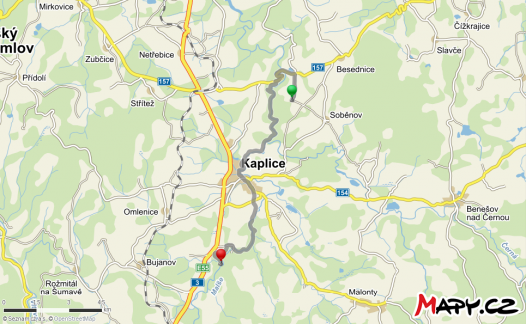 An interesting trip for more experienced cyclists is also the “Řemesla na řece Malši” educational cycling trail, which acquaints you with the history of the mills and hammer mills in the area between Kaplice and Cetviny, beyond the border on the Austrian side and continues toward the south to Freistadt and onwards to Pregarten. The trail partially copies the flow of the Malše River in whose surroundings we also get to know about the points of interest about the Pomalše nature environment. This trail is 24 km and its longer variants are 40.5 km or 70 km and is evaluated as a medium difficult trail.

The Sokolčí ruins are located above the headland above Černá, 4.5 km east of Kaplice. The rest of the castle is a protected cultural monument of the Czech Republic. It possible to go on foot from Smrhov to Sokolčí or take a bicycle ride on the marked tourist trails (green and red) with an approximate length of 11 km. 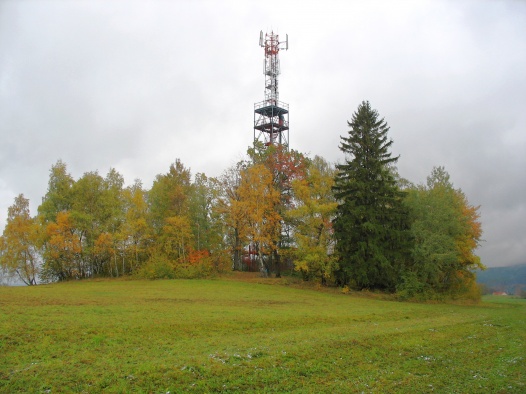 The undemanding, almost 6 km long cycling or walking trail on which apart from the lookout tower at a height of 624 m above sea level, you will see Slabošovky, from where you can also see the Alps in good visibility conditions, also the horse breeding station, the Church of St. Prokop or the Mohylník - archaeological site. On the way, you can also take refreshments in Restaurant v Besednici. 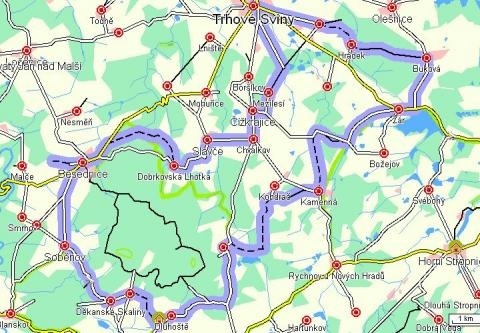 This is an all-day moderately difficult trip with a length of almost 50 km that is suitable for trekking bikes during which you learn about the interesting points of this nature park at 21 stops on this educational trail dedicated to the Slepičí Mountains whose official name is Soběnovská vrchovina. Most of the trail has a paved or tarred surface. The logo marking of the cycling trail is “Pamětí Slepičích hor" which is posted as an integral part of the yellow cycling tourist markings or the white arrows with green circle. 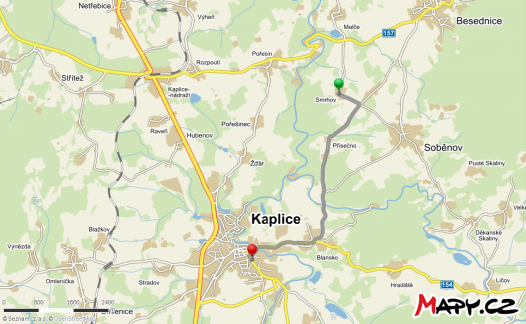 The reconstructed cellar space of the former Rožmberk Beer Brewery will bring you to the demonic world of the “Lifeless/Neživých” so-called Krampus and Percht. From close quarters, you will see the perfect workmanship of the wooden or leather crafted mask and the original Krampus clothing and equipment. An integral part is an impressive portrait gallery, photographs from the Kaplice Krampus show and film montage from the Krampus runs from previous years. 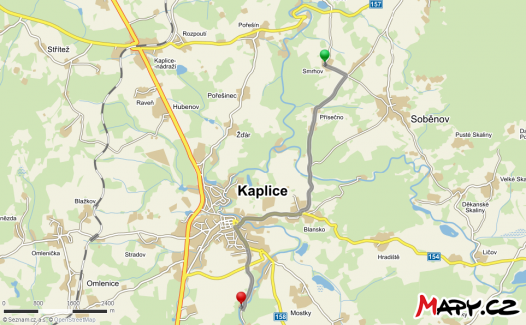 Almost two kilometres southerly beyond the town of Kaplice is the Shrötter Castle near the Malše River- it is a manor, which is the only surviving part of the large factory complex of the Schrötter family company. The manufacturing plant for thread and sewing accessories had an own hydro power plant driven by Girard turbine. 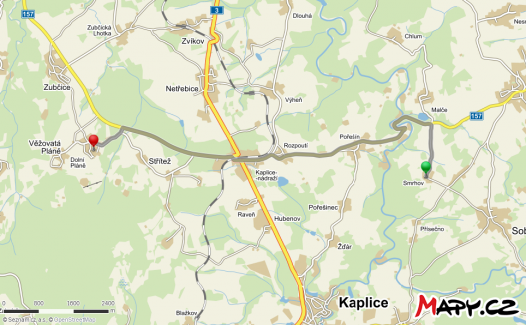 THE KOZÍ PLÁŇ SKI RESORT is a family resort intended mainly for families with children that is supplied with snow from 5 snow guns, lighted pistes with technically arranged trails, refreshments within and outside the premises, Wi-Fi free, children’s playground free for all , free parking - ski training school prepared on daily basis, permanent ski, healthcare service within the premises. Two main chair lifts are in operation - one with controlled travel speed (mainly suitable for children and beginners) with a length of 350 m and the second - self-service with a length of 500 m. A children’s tow is also available with a length of 100 m. 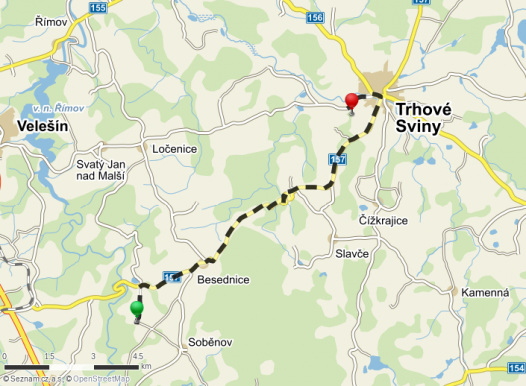 Several hammer mills have survived to date in the vicinity of Trhové Sviny. They are some form of manufacturing plant using the water from a number of streams flowing through the mountains as a source of energy. Of the surviving hammer mills, the Bušek Hammer Mill was the longest serving. The family of the last local hammer smith lived in the building at the hammer mill still at the end of the 70s of the twentieth century. Thanks to the long-term operation, the initial hammer mill building that was built already in the 18th century was spared from modernisation of the equipment and the buildings that served as dwellings and economic buildings were also spared. The only more significant building intervention was reconstruction of all objects done in the 1992 and 1995. The technical part of the hammer mill is fully functional and it is possible during the visit to see both the hammer and the forge with blowers and a grinder in action.

Sýpka - Muzeum Novohradských hor is a life museum, in which you and your children will not be bored. Bake your own brae roll here, walk over the barefoot pedestrian way, you will see functional grain storage technology and a lot of other things.

Not far from Horní Stropnice is a pilgrimage church in Dobrá Voda, a castle in Nové Hrady, the Terčiné údolí educational trail.